The ever thoughtful, insightful and wise Tyler Cowen has posted some thoughts on Scottish Independence over on Marginal Revolution.  A slice:

"For all its flaws, the UK remains one of the very best and most successful countries the world has seen, ever."

"If a significant segment of the British partnership wishes to leave, and for no really good practical reason, it is a sign that something is deeply wrong with contemporary politics and with our standards for loyalties."

Needless to say I shall be voting no in September.
Posted by Ally at 17:02 No comments:

If you don't vote you can't complain!

I was inspired to write this post after turning on my TV this morning to be greeted by the image of Ian McMillan (who I had no idea who he was until today) on BBC Breakfast talking about the Newark by-election.  Quite apart from the fact that he also seemed to believe (erroneously) that a single voter could make a difference (even in a closely contested by-election, how often does it come down to a single vote?), he also made the following declaration:

This seems to be a ubiquitous sentiment amongst people of various political leanings.  It is also something with which I happen to completely disagree.

Firstly, the fact that a person has (correctly) concluded that their vote has a negligible chance of making any difference whatsoever and therefore (rationally) decided that there are better uses of their time* than reading through flyers, manifestos, propaganda and other policy documents does not in any way make their opinions and preferences carry any less weight than someone who has made the alternative choice to vote.  Every single person is equally entitled to their opinion and equally entitled to complain, campaign, support or protest in whatever (peaceful) way they see fit, this extends to those who either could not or chose not to vote.

Secondly, refraining from voting can itself be a form of protest.  Admittedly, the problem with protesting in this way is it isn't possible from voting turnout figures to distinguish those who didn't vote out of protest from those who were apathetic, lazy or indeed simply had better things to do*.

One could argue that those who don't vote out of principal or in protest actually have more of a right to complain that those of us who do.  If you happen to have voted in favour of the candidate/party/policy which wins an election/referendum you have implicitly given your consent to be governed/represented/constrained by said candidate/party/policy and legitimised the use of certain powers and constraints over you and those you care about.  Even if you vote against the eventual winner, by participating in the election/referendum process you accept that process as legitimate and therefore implicitly accept the outcome of that process.

Say that you voted for the Libertarian Party at the last General Election.  Since the Libertarian Party have no MPs you would feel that your views have little to no representation in Parliament.  Chances are high that your representative in the House of Commons is either a Conservative or Labour party member (possibly a Liberal Democrat).  Whichever of the major parties they represent, you didn't vote for them.  You think that this therefore gives you the right to complain about them, their party and everything they do and stand for.  However, you still participated in the process which saw them elected.  You just don't like the outcome in this particular instance, in other words you don't like the choices that most other people have made.  But, you agreed to participate in the process which resulted in that outcome!

I say free speech to all.  This means it doesn't matter whether you vote or not you still have every right to express your opinions in whatever peaceful ways you see fit.  Let the non-voters complain if they've got something they think is worth complaining about!


* Some examples of better uses of ones time than voting include: spending time with ones family / friends / loved ones, working to provide for oneself and ones family, spending time at a hobby, doing some DIY/redecorating to improve ones home, enjoying a good meal, enjoying a music concert, etc.
Posted by Ally at 10:56 No comments:

Public Health and the Regulatory State

That's the title of a recent post by Eric Crampton over on Offsetting Behaviour and also of the paper he discusses therein, by Pierre Lemieux.

"The vast majority of the costs tallied in these studies, when not simply fabrications of double-counting, are costs smokers, or drinkers, or the obese, impose on themselves. But they're presented to the public as "costs to the country" rather than "costs incurred by the obese, smokers, and heavy drinkers.""

If you don't already read Offsetting Behaviour you really should.  I've been following it for several years now and it remains one of my favourite blogs.
Posted by Ally at 09:06 No comments:

Bad Infographic of the Day

Whilst browsing the MoneySavingExpert website over lunch today I came across this good example of a bad infographic: 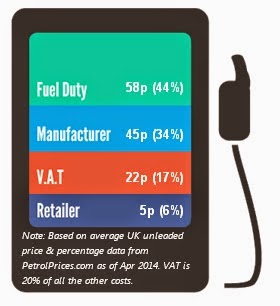 It appears on the page about cheaper fuel and is intended to illustrate how the cost of a typical litre of unleaded petrol breaks down.

There are two problems with the above graph.  Firstly, most of the percentages shown in brackets are wrong.  For example, a very quick and simple bit of mental arithmetic will tell you that 5p is not 6% of £1.30, but less than 4%.  However, this is not the main problem with the graph.  The main problem is that the areas of the graph are all wrong; it significantly under-represents the portion of the petrol price attributable to fuel duty and to the manufacturer, slightly over-represents VAT and massively over-represents the retailers cut.

I've produced a corrected version of the infographic, which is shown below.  See if you can spot the difference: 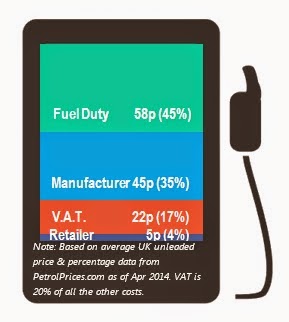 MoneySavingExpert claims the data for the infographic comes from PetrolPrices.com; I can't find the infographic there, so I'm guessing that's MoneySavingExpert's own work.  There are a couple of graphics on this page that aren't any better, although they just appear to show the cost breakdown numerically, with the larger numbers written in a larger font to give them more prominence - they aren't quite as potentially misleading.